After a few big days of exploring the area from a property standpoint, CJ and I decided that Saturday would be a day of play. I headed up to Monarch Resort for some snowboarding, and CJ and Judith had a great day hanging out, checking out the local shops, and sightseeing.

The weather at Monarch was absolutely beautiful with the sun shining and temperature around 30 degrees. The snow conditions, however, were a bit on the icy / crunchy side due to the last snow fall being only 6 inches two days prior. My experience with Colorado ski areas is pretty limited….I’ve only previously visited Wolfcreek near South Fork (southern Colorado) and Purgatory in Durango (western Colorado). In comparison, Monarch’s facilities and slopes are more like Wolfcreek, being solely a ski area, not a resort style facility. There were no condos or other “ski in / ski out” accommodations adjacent to the slopes. I found the lodge nicer than Wolfcreek, although there were fewer slopes and less snow. However, this may not be a good year to compare, due to the lack of snow throughout Colorado. 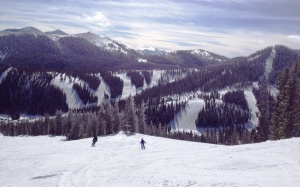 I’ve never snowboarded by myself before, so wasn’t sure how long I would last. Unfortunately, Monarch doesn’t offer half day lift tickets, so I needed to buy a full day pass regardless. When I arrived at the ticket counter, a young boy approached me asking if I would be willing to purchase a ticket with him on his two for one ticket deal. At first I thought he was scamming me, but the guy at the ticket office confirmed that it was legit. So I ended up paying half price for a full day lift ticket! Out of all the people milling around, that young boy chose me…God is awesome! He knows our deepest desires, even my struggle to pay full price if I were only going to board a half day.

As for Judith and CJ, they spent a great day in fellowship and enjoying the local scenery. They drove up to Buena Vista to check it out, looked at some properties that CJ and I viewed the day before, then headed back to Salida for lunch and shopping. As CJ puts it, ”there just isn’t enough time to explore all cute and quirky shops in downtown Salida”. Not only does Salida have a great food scene, but they also have a pretty extensive art district. Our girls were pretty excited to find Ploughboy, a farm fresh and local grocer that has everything from meats, cheeses, and produce to refillable milk jugs and homemade brandied applesauce, just to name a few items. When I met them back at the hotel, they were both tired and happy. We decided to make it an early night, so we headed to Amicas (our favorite wood-fired pizza joint) for pizza and a glass of wine. I think this was Judith’s first pizza in years and she was thrilled to finally find a place that made gluten free pizza crust and non-tomato based sauce. We were all happy campers!

On Sunday we visited River Valley Community Fellowship for worship. The church met in the local theater, which was previously the town’s steam plant. The old plant was very nicely remodeled into a theater for the performing arts…cool architecture and very comfortable seats. The people were friendly and the worship / message was authentic and spirit filled. The theater was packed with about 100 – 150 people, which is much smaller than our church in Austin (Gateway). It felt a bit like small group, with the pastor’s wife asking for prayer requests / praises prior to service. I

found it amazing that she knew everyone’s name. As people stood and shared their struggles, she would ask those close to the petitioner to surround them as she lead us all in prayer. Certainly, if we chose this church as our home, the size of the church would require some adjustment. But although it’s not what we’re used to, we sense that a smaller church venue is where God is leading us.

After church, we stopped for brunch at a restaurant just down the street from the Church, called Laughing Ladies. One of my favorite breakfast meals has always been eggs benedict. However, when I gave up beef and pork I couldn’t eat it anymore. So when I saw that they had salmon eggs benedict, I jumped on the chance to try it and it was delicious. Both CJ and Judith agree with me in saying that the food again was awesome!

After brunch we wished Judith farewell as she headed back to Pueblo and we headed back to the room for some down time. It was nice to relax, watch some TV, and play game after game of “Words with Friends”….CJ is addicted. Around dusk we looked out the window and noticed it was snowing. This was the first time since we arrived that we saw snow coming down

…although you see it on every mountain vista. We were energized!! The snow pulled us from our movie coma and prodded us to go for a walk. Since we don’t see snow very often in Austin, it seemed like Christmas to us. Of course, to the locals, it’s just another snowy evening. I kinda like the sound of that…next year at this time, we’ll be locals.

Monday morning we woke up to a beautiful day. We packed up and headed north to Buena Vista to meet Bruce Kramer for breakfast. He was a major player in the YoungLife organization for over a decade. His role was to help in building existing camps and finding locations / developing new ones. He’s now retired from full-time ministry and has his own custom home building company.

The meeting began with Bruce asking a few questions and us then sharing our story / path to this point. He told us that he loved our passion and excitement for our ministry, but he did caution us on the mundane and bureaucratic efforts that are required in running a retreat. We had experienced some of that leading the Outside Ministry at Gateway, but it was a good reminder. Another major issue that he raised was in respect to finances…he indicated that it’s important that the operation be self-sustaining, with donations being requested for initial investment and capital improvements, such as buildings. Understandably, it’s been his experience that people have more of a tendency to rally around a physical improvement than around daily operating expenses. Luckily, this was already our vision as we’ve been developing the financial plan.

As the meeting was drawing to a close, Bruce introduced several other options that we had not yet considered. Instead of building a retreat from the ground up, we may want to partner with another retreat/camp or outfitter. In doing this we could possibly have some funding for start-up, an established client base, and experienced personnel. Sonshine Wilderness could be a separately run arm of the existing operation…residing together under the larger umbrella. He also mentioned taking over another retreat location as an option. Certainly, whether it’s a retreat facility or not, any land that has pre-existing buildings would be a huge plus in terms of cost reduction due to utilities already on site. Overall, the meeting was extremely enjoyable and very productive. Bruce gave us lots of ideas, guidance, and affirmation.

So as we continue our journey, we ask that you all pray with us for God’s vision to be revealed. Are we or aren’t we to partner with an existing entity? If so, which one? Pray that it becomes clear and that our eyes are open to the steps forward. In addition, we also need prayer on stripping away any pride and / or need to control and replacing it with humility. Above all else, we want to let go of our own expectations and walk in God’s will, whatever that looks like. Thank you all for sharing this journey with us….. 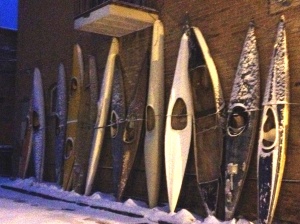